In the early elementary grades, complex science instruction for gifted children can — and should! — take advantage of their characteristic advanced abstract thinking skills and penchant for ever-deeper learning to feed their voracious intellectual appetites and develop authentic scientific thinking.

The innate curiosity of gifted children means they may acquire significant amounts of scientific information before they even get to school. That is a euphemistic way of saying that they can consume mountains of information from non-fiction books, YouTube, anatomical posters in doctor’s offices, or anywhere else they can find it, frequently amassing deep knowledge in one or more areas of particular interest.

Many a parent of a gifted child has been corrected by a very young expert who knows far more than they do about dinosaurs, the moons of Jupiter, or the periodic table.

A deep dive into science

Subject matter expertise is critical in teaching gifted students, who may seek a “deep dive” into whatever topic is under study. Annie Connolly-Sporing, who teaches science in Grayson’s Lower School, explains that her academic background is in biochemistry and genetics, not entomology, so she approached the K-1 unit on insects and spiders from a different angle entirely: “What I do know a lot about is taxonomy, so I pulled up to a higher altitude and designed the unit through that lens. They do learn about insects and spiders, but they also learn about scientific thinking and classification, which are complicated ideas, but they are totally capable of understanding them. Then, as we continue through other units about mammals and fish, or paleontology, they can continue to apply that kind of thinking.”

First, some background for non-scientists: evolutionary taxonomy is a classification system by which natural scientists establish relationships between species based on ancestry, expressed traits, and degrees of evolutionary change. This topic is sophisticated, but that does not mean younger learners cannot address it. On the contrary, studying these complex science systems engages gifted children’s advanced abstract thinking capabilities by exploring evolutionary relationships and surprising connections between species that may appear unrelated.

This subject matter is also highly responsive to differentiation for students with different levels of ability to engage in the topic at different levels. Taxonomy’s polysyllabic Latinate vocabulary even functions as “bait” for hungry minds seeking to be taken seriously as scholars.

“Comparing the different orders was really the meat of the unit,” she explains. “Just telling the students that an insect has three body segments and six legs while spiders have two segments and eight legs is… boring, frankly, not to mention it’s over in half a class period. They are capable of so much more than that; they’re hungry for deeper learning, so that’s what we do.”

Because her students are also very young, the advanced vocabulary and concepts of the material need to be conveyed through developmentally-appropriate activities. At this age, in particular, children need to move around during the day, so she creates movement-focused activities that allow them to get out of their seats and use their bodies to learn.

The hymenoptera section of the unit ended with an elaborate masking-tape “ant farm” on the floor, with colored dominoes representing food (green), water (blue), and expanded colony space (purple) distributed throughout the room that students needed to gather and distribute according to their roles. There were even red dominoes representing intruders into the tunnels, allowing students the opportunity to work together to defend the colony and expel the interlopers.

“The thing they liked best was definitely attacking the enemy,” she observes with a chuckle, “and the masking tape ‘walls,’ too, because those essentially made the classroom floor into a video-game-like space that the students could move around in and explore.” 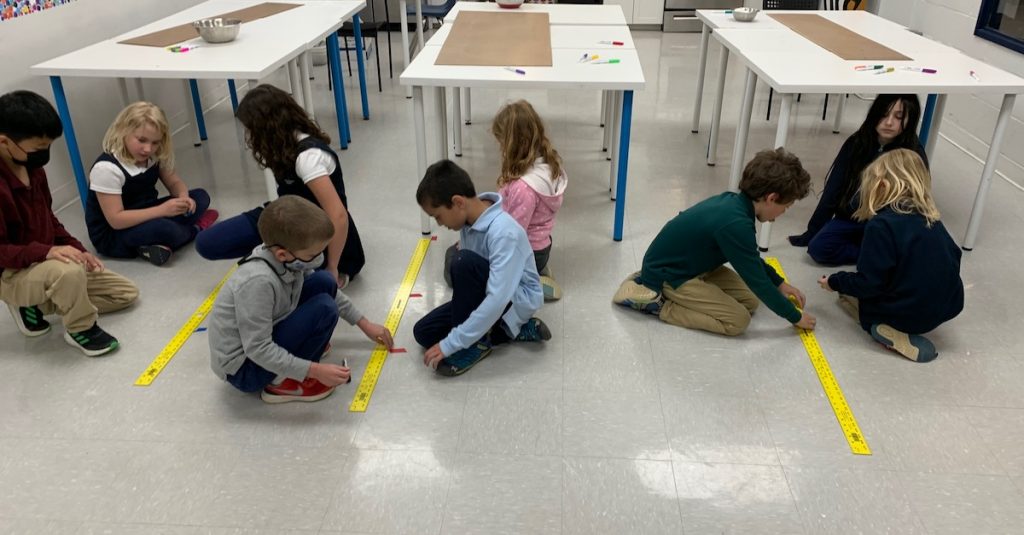 As part of the unit on evolutionary adaptations for 2nd and 3rd graders, students spend two days learning about emperor penguins through reading, slides, and discussion, and then Ms. Sporing puts the information into concrete terms they will explore through an activity: how does the stronger hemoglobin that has evolved in penguins improve the survivability of the species?

Everyone then troops to the gym for a simulation; there are dozens of construction paper “fish” spread across the floor. Some students play penguins, seagulls, or otters (species competing for food), while others use a stopwatch to make sure that all “dives” to collect fish are timed to accurately reflect their capacity for breath-holding — everyone must be back at the starting line (the surface) when the timer goes off, so their animal can take another breath.

After role-playing several rounds of trips into the water, students realize that the seagulls’ 2-minute dives and the otters’ 5-minute dives quickly empty the shallows of fish. However, with their stronger hemoglobin, the penguins can dive for up to 30 minutes, allowing them to reach fish much farther from the surface, thus enabling their survival as a species even when there is significant competition from other fish-eating creatures in the same area.

Her students, as you might imagine, embraced the opportunity to run in class, to collect as many fish as they can, and to compete against each other in their various roles. The learning in the activity is very real, though, and makes the power of the penguins’ evolutionary advantage inescapable. As a bonus, the children have managed to learn this lesson while laughing and playing, which to some degree recasts the grimness of competition for food rather than making it a troubling topic for emotionally sensitive little minds.

By leveraging the power of play and combining it with movement, Ms. Sporing’s gamified science lessons create opportunities for movement along with new ways for her gifted students to deeply engage with complex scientific concepts. This multimodal approach scaffolds their learning about topics like the role of evolution in changing the dynamics of competition for resources. 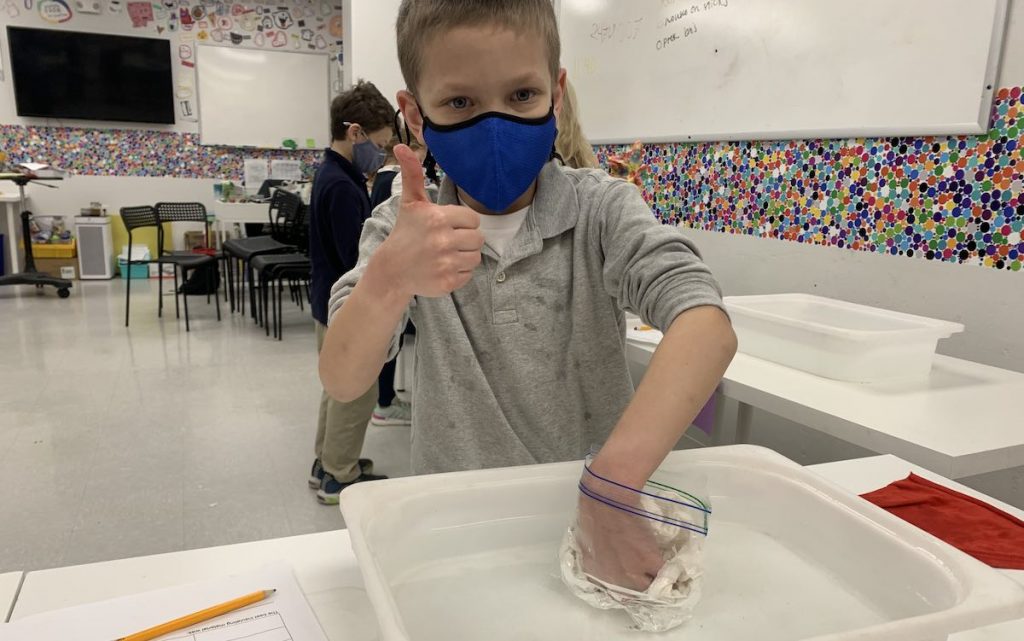 AN UNSPOKEN MESSAGE OF CONFIDENCE

By giving students meaty science topics using authentic, domain-specific vocabulary, a teacher also conveys confidence in students’ intellectual ability. While this message may be implicit — though it certainly doesn’t have to be — it also scaffolds their willingness to take intellectual risks. If everyone in the room is learning how to pronounce “hymenoptera” together, it’s less embarrassing to make a mistake, since you’re quite likely not the only one who does so.

Teaching challenging topics democratizes the effort of learning, lessening the chances that one child will be a “know-it-all” who has already mastered the material. Instead, it’s new to everyone, leveling the playing field somewhat and reducing anxiety in students who may be unused to not knowing something.

Gifted students as young as kindergarten and first grade are capable of taking in and fully comprehending complex information, and when properly prepared, can then deploy it themselves, generating new understandings by experimenting, planning and modifying different species’ behavior — and often trying to optimize it, along the way! —  based on not just new knowledge, but also on their experiences in the classroom. Just because they’re young doesn’t mean they are not ready to address advanced topics, so long as lessons are adapted and accelerated to create real challenge and high levels of engagement.

Advanced topics don’t mean that further differentiation is not possible or welcome, though; there are always opportunities for more complex science instruction with advanced language and vocabulary or more detailed information and connections. Experienced teachers of gifted children know they must be willing to welcome — or to lead — students to deeper waters.

After all, that’s where the juiciest fish live; just ask a penguin in Ms. Sporing’s class.

For teachers interested in reading more on this topic, our blog has more posts on the importance of play, gaming out gifted education, and creating a mathematical playground in your classroom.