Teaching students how to discuss issues with empathy and respect for each other can help them develop a nuanced understanding of tough issues in an era of highly polarized opinions and conflict.

Gifted children love to argue — the more obscure the point or the finer the hair they split, the better. In fact, it seems as though many of them should just be issued a legal degree along with a birth certificate. In their early years, arguments tend to be about facts: how many countries are in NATO; which continent Russia belongs on; or the percentage of water on the Earth which is fresh.[i] Voracious learners that they are, they know a lot of things. Facts are right or wrong, so seeing both sides is not on their radar. They have a lot of experience in being right, so they can be insistent that they are right — and (perhaps infuriatingly) they often are.

There is a different kind of argument, however, for which giftedness does not necessarily equip them very well. When considering broader topics in history and delving into thorny social issues, this frequently-reinforced experience of being factually correct can lead them to confidently stake out territory that they then defend with surprising ferocity. Unfortunately, such certainty is generally not well-suited to higher-order thinking and to fully grasping the import and implications of ideas that demand a nuanced understanding of multiple perspectives.

IT’S NOT ALWAYS ABOUT RIGHT AND WRONG

Typical school experiences are fact-centered in the early elementary years, focused on right answers and wrong answers. It is only starting in middle and high school that they gradually encounter topics requiring more nuanced understandings. The theory here is that one must equip the students with enough facts before one can ask them to think about and discuss them using critical thinking skills.

Gifted children do not fit into this standard-issue structure (surprise!) — not only do they generally have a larger pool of facts to draw from than their age-peers, but they are also more able to handle abstract thinking at an earlier age, as anyone who has answered existential questions from a gifted four-year-old can tell you (e.g., “Mommy, what happens when we die?” and “The universe is so, SO big, and I am so, SO small… why do I matter?”).

When their classes do begin to include more discussion, then, this tendency can be especially difficult; essentially, they must be trained out of black-and-white thinking so they may progress towards handling ever-more-complex questions and problems. Regrettably, these qualities — extensive experience in being correct to a larger degree than others, a large pool of factual knowledge, and advanced capability for abstract thought — can come together in a strange brew that tastes an awful lot like intellectual rigidity. A fragile sense of themselves as “smart because they get the right answers” gets mistranslated into “I cannot be wrong,” and its corollary, “if I change my opinion, that means I was wrong, and perhaps you were a little bit more right than I.” Anyone who knows a gifted child can imagine how well-received that idea might be. (Spoiler: not well.)

DEALING IN SHADES OF GRAY

Trying to get a gifted child to budge from a fervently-held position can truly feel like trying to move a mountain, rendering an all-gifted classroom a Himalayan trek, metaphorically speaking. An effective teacher must be suitably equipped and prepared in order to handle such an arduous undertaking; to some degree, she must be prepared to be an intellectual Sherpa, though she must also plan to gradually decrease her own load while equipping students to carry their own gear.

Providing students with sufficiently challenging material allows a teacher an opportunity to deconstruct her students’ fortifications. The only way forward, really, is to push through any resistance so they develop empathy and respect for different ideas and each other and deal in shades of gray rather than the black/white thinking many of them exhibit.

What does this look like, and how can it be accomplished? 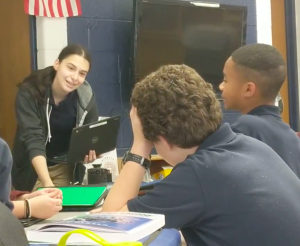 One approach our Social Studies teacher Lindsay Andreas uses is called “Take a Stand,” in which she posits Big Questions that demand a lot of discussion. In response to a statement such as, “One has a moral responsibility to disobey unjust laws,” students must physically arrange themselves according to the strength of their position. One wall of the classroom is designated as “I strongly agree,” and the opposite wall is “I strongly disagree.” Ms. Andreas’s students get up from their seats to go stand somewhere between these two points to reflect their opinion on the matter.

(Note that this setup communicates from the very beginning, even before anyone speaks, that there is a continuum of opinions on which it is indeed possible to occupy a middle position — a radical notion to some young gifted minds.) Discussion begins when she picks a student from each end and one from the middle to articulate their opinions.

LEARNING, NOT WINNING, IS THE GOAL

The meat is in the middle, of course: empathy and respect develops by listening to those students not on one side of the room or the other who have to explain why they feel that there is some merit in both positions. Listening to intermediate positions essentially grants students on the extremes a kind of “permission” to adopt a more nuanced understanding, and the fact that it is their intellectual peers offering these standpoints rather than adults counts for something, too.

As the discussion proceeds, the space between the two ends — the grey in the middle — generally gets more populated. While the exercise is not a debate, and winning “converts” is not the goal, students are encouraged to move away from their current position if something they hear makes them think a little bit. That movement, according to Ms. Andreas, is actually a growth moment. It means that they have changed their mind — sometimes only a little bit — but they may have a hard time not perceiving that as some kind of shameful admission of ‘I was wrong.’ They learn — slowly — that harnessing their intelligence actually isn’t about being right, it’s about being willing to wrestle with complicated ideas, which are rarely responsive to black/white thinking.

Once the idea of changing one’s mind is really absorbed, deeper learning can really begin. At that point, the student is open to listening to others and taking in new information that could deepen their understanding. As a bonus, this new intellectual flexibility allows them to leverage their characteristic strength in abstract thinking — more complex ideas can be connected more easily if there is, indeed, more grey around the edges where they might overlap.

While there is plenty of academic learning going on in these interactions, there is certainly an equal amount of social-emotional growth going on. They absorb entirely new perspectives about themselves and how opinions work: how they are formed, how they can be changed, and how such movement doesn’t signal any kind of intellectual weakness on their end. Building skills of persuasion, empathy and respect rather than conflict and debate emerge as students listen and understand the perspective of their peers.

“In fact,” says Ms. Andreas, “I tell them that the ability to move, to shift their ideas, actually signals intellectual strength. It shows other students that they are listening, absorbing what they’re saying. It’s not weakness — it’s a powerful thing.”

[i] The answers are, in case you must argue them immediately with a gifted child: as of this writing, there are 29 countries in NATO; the U.N. classifies Russia as European because 75% of the population lives in the European part of Russia, despite 75% of their territory being in Asia; and 2.5% of the water on Earth is fresh.

Whenever you find yourself on the side of the majority, it is time to pause & reflect.

Note from the author:

In writing this post I also came across this Education Week commentary that also speaks to the importance of learned, precise language in communications, and helping our students to accurately convey what they mean when expressing their views. — JWW