Our students are voracious learners, and field trips are a great opportunity to build on what they are exploring in the classroom. Each excursion allows students to see and experience elements of their studies in person, help to answer and explore new questions, to peak their curiosity and build on areas of interest. Enhancing their social interactions and awareness in a different environment—with each other, with their teachers, with parents who attend, and with new people and places in the community—is also a great benefit of the trip!

Here are two ways we ventured outside the school this month: 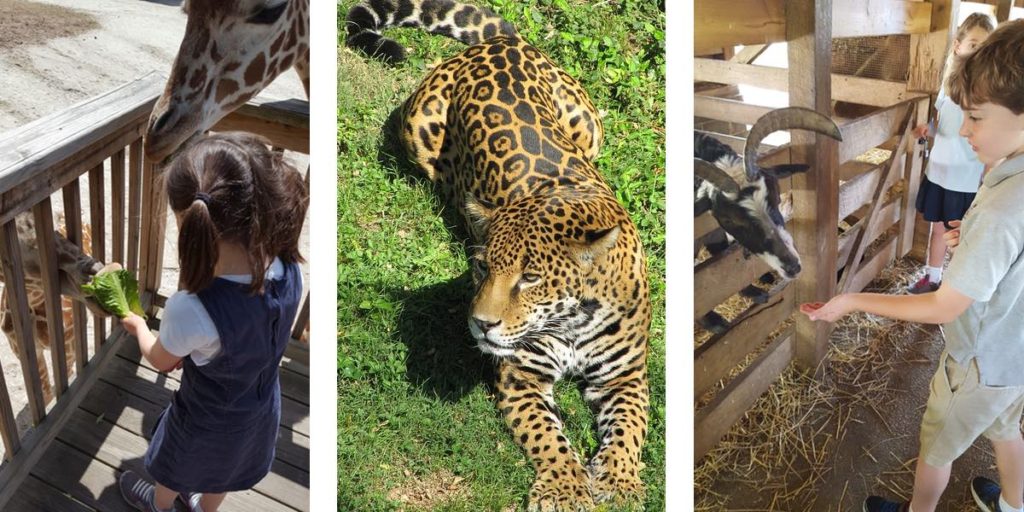 This month, our K-3 students visited the Elmwood Park Zoo in Norristown. Before our trip, the classes were learning about different animals and their habitats.  They worked in teams to complete scavenger hunts where they identified animals based on certain characteristics (native to North America, bigger than you, smaller than you, can live a long time, etc.).  These activities really encouraged the students to engage with the zoo in a very interactive way.

The featured animal at the zoo this month is the Jaguar. Two baby Jaguars, named Diego and Luna, were born at the zoo in January, and were a big hit with all the kids. We were able to feed the giraffes,  goats, sheep, and rams.  Claire really enjoyed feeding the giraffes, and excitedly exclaimed “he spit on me!” We also saw very large bison, were charmed by the capybaras, and learned about owls from one of the zookeepers. There was a playground and picnic area that was also a lot of fun!

A fun fact we learned: Did you know that the largest prairie dog town in the world is in Texas?  It’s 25,000 square miles and it is estimated that nearly 4 hundred million prairie dogs live there! That’s a lot of prairie dogs. Road trip, anyone?

Going to the Theatre

Our 4 and up class  attended The Miraculous Journey of Edward Tulane at the People’s Light Theatre in Malvern this month.  This beautifully captivating adventure of a very sophisticated china rabbit named Edward Tulane is based on the book by Kate DiCamillo.  The play is by Dwayne Hartford, and runs through June 4th.

A few of the children had read the book beforehand, but we didn’t do it as a class. We chose this trip for the magical experience of enjoying live theater. While it wasn’t intentional, some of the students did see connections to our immigrant experience unit in discussing the play:

“Yes, I had read (the book) a while ago. I thought the play was very good, and there were many characters who seemed to be immigrants. The doll maker was from France, and he was in Memphis. Edward Tulane could count as an immigrant because he came from France.”

“Edward is new to many different places like an immigrant, but he didn’t choose to go to those places.”

“The play had a lot about change and about feeling comfortable with your surroundings. Like the immigrants, he sometimes felt very comfortable and other times not so much.”

“The story line was very emotional. The play showed how many of the struggles people face in a new country with different traditions and places to live.”

Many of the children were moved by the social and emotional struggles that Edward Tulane faced in his journey and what he learned from these experiences:

“The play showed that learning to love is a very good thing even though sometimes it doesn’t work out.  Edward experienced a whole lot of loss in his journey of learning to love.”

“I loved how he changed during the show. He really became a better bunny because he finally learned to love someone and not be so selfish.”

“I thought the play was a bit funny at places, but it was also sad. I liked that because it was well-balanced in that way.”

A number of students also commented on the design and production of the play:

“I thought the show was awesome. They had the lighting with the stars that looked so realistic – as if the stars were floating. The special effects and sound effects went really well with the scene.”

“I thought they were very creative about how they changed props, changed characters and set up the scenes. That made the show very unique”

“The play was good, but I didn’t like the rabbit. He was creepy. The music during the show was cool. It fit the play.”