Surprise! Gifted Children are more likely to be “Questioning”

Gifted LGBTQ youth expert Terry Friedrichs, Ph.D., Ed.D., reports that approximately 30% of gifted children are LGBTQ or “Questioning.” Students with intellectual gifts are more likely to identify as LGBTQ due to their questioning, exploratory nature which makes them less likely to conform to social norms and more likely to accept ambiguity and diversity than their peers. (Wexelbaum, R & Hoover, J, 2014). Many gifted children tend to be androgynous, exhibiting the characteristics and interests of both genders.

It can be challenging for parents who have lived a heterosexual life style without prior experience as an LGBTQ ally when their gifted preteen discloses they are LGBTQ or Questioning. The degree of challenge can be influenced by religious, community and family norms. But consider: however challenging it may be for you, it is ten times more challenging for your preteen. Fears of parental abandonment, peer ostracism and violence can contribute to depression, suicidal thoughts, and hiding distress from parents and teachers (Peterson & Rischar, 2000).

The National Association for Gifted Children provides a “Gifted LGBTQ Toolbox” for Parents and Caregivers. Authors including, but not limited to, Terrence Friedrichs, Laura Renzi-Keener, Paul James Sedillo, Alena R. Treat, Jean S. Peterson, Heather Rischar, Becky Whittenburg, Virginia Hutcheson and Carol Tieso have researched and written articles on gifted LGBTQ youth.  While I mention below some of the things I have learned in my journey to support my Questioning preteen, this article is not intended to teach the complexities of the LGBTQ experience. The above-mentioned authors can provide the in depth exploration important to any gifted LGBTQ parent’s journey.

A journey is filled with new discoveries

My child grew up asking for Lego, trains, Barbie, crafts and basketball. My child’s interests ran the gambit: from Math and Coding to English and the Arts. I did not want to risk stifling creativity and achievement by implanting traditional heterosexual gender role identities. I made it a habit to choose two female, two male and female/male parents as often as choosing male/female parents whenever the opportunity arose in play. But when my child always chose male/female parents, I figured that was where we were headed. I might have been wrong.

When my nine year-old first asked about sex, I patted myself on the back for finding a website designed specifically to address this question. We went through the binary female/male reproductive information together. I concluded with an admonition that each parent discusses these topics with their children at different ages, so we should respect this by not raising the topic with friends. But having that initial birds and bees discussion was very different from parenting a gifted preteen entering puberty.

As we know, all gifted children can approach topics of interest with a single-minded intensity. And, no-brainer, most preteens find the idea of sex interesting, in all its various constructs. But when my gifted preteen began to question sexual and gender identity, no matter how intellectually prepared I was, I was completely unprepared emotionally.

I was at a loss when asked about how a particular individual had had a baby without getting married. My jaw dropped with the question of what the two teenage girls at camp were doing when they were moaning in the bathroom and later exited looking embarrassed. I was completely unprepared to answer logistical questions about how two men have intercourse. I couldn’t find any websites recommending ways to discuss these topics.

But my emotional unpreparedness went deeper. As a non-white person, I began to think about the movie “Guess Who’s Coming to Dinner.” It’s one thing to want your child to be accepting and kind to everyone of all races, genders, national origins and sexual identities. But when your child manifests membership in a group that has been a magnet for hate crimes, you cannot help but fear the difficulties you know your child will face.

Expanding my own capacity for empathy

One of my close high school friends was a male with stereotypically female mannerisms. Many students called him “gay” as an insult. They also used the word “gay” to describe activities and heterosexual people they considered uninteresting, stupid or beneath them. Adults who would have immediately stopped a child from using racial slurs in this manner, failed to recognize the insidious and backhanded insult surrounding this use of the word “gay.” Because of my high school experience, I became uncomfortable using LGBTQ labels.

Consequently, the first thing I did when my preteen began to identify with those “Questioning” was learn more about LGBTQ terminology. Historically, “gay” was embraced over “homosexual” and included both same sex male and female relationships. The “L” was moved first when lesbians stepped forward to help during the AIDS epidemic. I read about the power the LGBTQ community has experienced in taking words historically used to hurt and making them their own. My struggle with the word “queer” was due to its historical meaning as “unusual, strange, or odd.” But I learned there are people not included within traditional LGBT terms such as intersex (those born with a combination of male and female biological characteristics), asexual (those who are not sexually attracted to any gender), pansexual (attraction without regard to gender); questioning (those keeping their options open as they question and discover their genders and sexual identities); and allies (those who support members of the LGBTQ community). Many LGBTQs see the “Q” as an umbrella term for all sexualities and genders, and describe sexuality as fluid. As with all communities, there can be hostilities and misconceptions between subgroups. Some see “queer” as a way to unite subgroups. Others advocate for “gay” to be all inclusive with a reordering to GLBT. Some use GSM for “Gender and Sexual Minorities.”

After learning terminology, I looked for articles specific to gifted LGBTQ youth. In her 2016 article “Gifted LGBTQ Social-Emotional Issues,” Alena Treat identifies issues which create a need for intense, personalized social and emotional support for LGBTQ students. The first identified issue was no surprise: LGBTQ students are verbally and physically harassed at twice the rate of non-LGBTQ students (Southern Poverty Law Center, 2013). About one third of all teen suicides are by LGBTQ students (Whittenburg & Treat, 2009). While Western society has moved toward accepting, and even promoting, girls’ interest in math, science, and technology, society lacks support with the same enthusiasm for boys interested in nontraditional domains.

Further, few schools have known LGBTQ role models. Both gifted and general education curricula fail to identify eminent individuals by sexual orientation or gender identity.  This failure can lead LGBTQ students toward isolation culminating in trauma, depression, fear, and unhealthy perfectionism. School communications with commonly used terminology that assumes heterosexuality and traditional family configurations can alienate LGBTQ students as well as those with LGBTQ individuals in their families. Highly gifted/creative individuals, especially writers and visual artists, have been found to be at particularly high risk.

For these reasons, I have helped my preteen identify teachers/staff who have taken actions which, at minimum indicate they are LGBTQ allies. We also have identified teachers/staff who have never referred to their “husband, boyfriend, wife, or girlfriend” as potential LGBTQ members. We have discussed how parent phobias can make it difficult for LGBTQ teachers/staff to feel comfortable making their LGBTQ status known. I have resolved that the next time I see someone make fun of LGBTQ members, even during a school fundraiser, I will immediately speak up rather than stand by silently.

I learned from Dr. Friedrichs, co-author of Needs and Approaches for Educators and Parents of Gifted Gay, Lesbian, Bisexual, and Transgender Students (2017), that there are things that I can do at home to help support my Questioning preteen. Although I have always tried to be inclusive, I am taking the painful steps of incorporating language that honors sexual orientation and gender identity differences. This has been painful because I worry about disappointing my preteen by exposing the depth of my ignorance of LGBTQ issues. I find that humility and self-deprecating humor can help. After all it would take a lifetime to unlearn all of our known biases not to mention our intrinsic biases: there is value conveyed in embarking upon the journey.

I also try to identify and discuss news events that affect the LGBTQ community. I encouraged my preteen to become active in The Grayson School’s LGBTQ Rainbow Club. I try to find ways to speak often and positively about LGBTQ individuals. I have identified LGBTQ individuals who have been catalysts for change such as Alice Walker, Harvey Milk, Kim Coco, and Byard Rustin. The Gay Revolution is on our reading list. I bragged about a coworker who mentioned his “husband” no less than thirty times during his interview, and successfully sued for his spouse to receive equal employment benefits.

At times, I ponder what my preteen’s Questioning status means. Is it a way to ease into the biologically gay status that my preteen has always felt but isn’t yet ready to fully embrace? Is it a temporary rebellion against the dangers of societal labeling: my friends tell me that the Questioning phenomenon appears to have been embraced by preteens across the country. Some in the LGBT community refuse to accept the Questioners, broadly labeling them as “tourists.” More so than for preteen females, I fear that for preteen males to whom the label “tourist” applies, there could be unanticipated long-term societal consequences. But perhaps the Q movement will ultimately teach us that our views on binary gender were similar to our views that the earth was flat: we simply got it wrong.

A unique by-product of my journey has been my ability to understand more deeply what it has been like for my white counterparts to reconcile love for racist family members with disappointment by their antiquated biases. By some family members, we will be viewed as if we are experiencing the shame of a teenaged pregnancy. While this causes me an occasional pang of regret, this pang is immediately overrun by my joy in celebrating my preteen’s courage to self-define identity in every way whether it be professionally, racially, religiously, culturally, non-binarily or sexually. 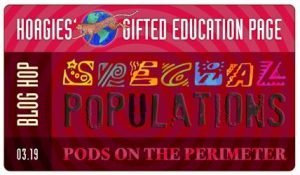 This post was also published on the Hoagies’ Gifted Blog Hop.  We encourage you to read more articles on special populations within the gifted community, and discover new bloggers  to expand your network and resources as you continue your journey on raising and educating gifted children.