In recent days, the poor snowflake has largely been relegated to use as a sarcastic metaphor for overly-delicate souls who require special attention or accommodation, exceptions to the rules, or “safe spaces” that keep at bay the harsh realities of the world.  However, that very uniqueness is precisely what has kept people inspired to craft innumerable snowflakes out of all manner of materials year after year. In the right hands, cutting out paper snowflakes can be a rich experience allowing students to explore an avalanche of topics (!) including infinity, calculus, and geometry in addition to aesthetics and design. 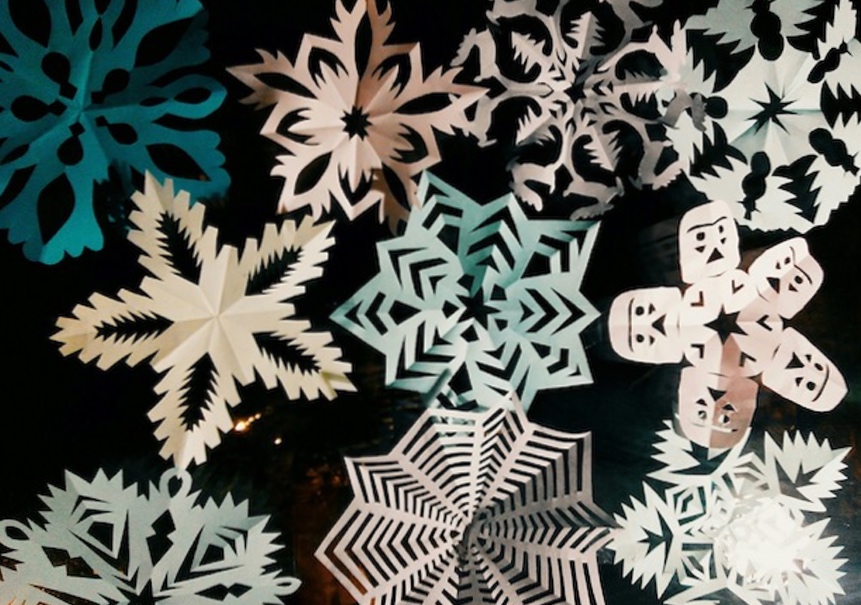 Most elementary school students will create paper snowflakes in the winter as soon as they can make their little fingers work safety scissors (or, heaven help us, as soon as they learn to use glue and glitter).  Generally, they create lovely classroom decorations that festoon the hallways until the end of December or January, though an ambitious teacher bent on including academic material in every moment of the day might make the creation of snowflakes a lesson about symmetry, though terms like “bilateral” and “rotational,” (advanced vocabulary is always bait for a gifted child) don’t generally make an appearance until 4th grade, when the days of snowflake cutting are nearing their end.

So how can a teacher amp up the thinking in something as traditional and often purely decorative as cutting paper snowflakes?  By bringing serious math into it, of course: before break, both our 2nd-3rd grade and 4th-5th grade cohorts made fractal snowflakes to decorate our halls.

FORECAST: AN AVALANCHE OF GEOMETRY

In 1904, Swedish mathematician Niels Fabian Helge von Koch published a paper titled, “On a Continuous Curve Without Tangents, Constructible from Elementary Geometry,” in which he unwittingly laid the foundations for amazing snowflake constructions even more than a century in the future.

Here is an animation of the first seven iterations of that exercise:

What von Koch discovered is that even after infinite iterations, this figure doesn’t get substantially larger in terms of area (more precisely, it approaches, but never quite reaches, 8/5 the area of the original triangle), but its perimeter gets larger and larger (each new iteration is 4/3 the length of the previous one), increasing towards infinity.

Even if you’re not terribly mathematically inclined, this is a fascinating concept, and one that students and adults alike can grasp, especially if expressed concretely: if you have a fenced backyard of a certain size, and you modify the fence in this particular way over and over and over, your backyard never gets bigger than 8/5 its original size, while your fence gets longer and longer, with no upper limit. (This is simultaneously encouraging to whoever mows your yard and deeply distressing to whoever is having to schlep to and from Home Depot for you with more and more sections of fence.)

Researchers think children may encounter the idea of infinity as early as preschool[1] though at that point, it is a fuzzy notion more connected to the idea of something so big you cannot imagine it; measurement is not part of this concept at all.

TO INFINITY AND BEYOND

When they encounter the idea of infinity in mathematics for the first time, generally expressed as the ellipsis in “1, 2, 3…” students primarily conceive of it initially as a specific number — the very biggest one — in a potentially infinite sequence.[2]  This understanding progresses a bit when they learn division and discover that 1/3 has a repetend of 3 — and are usually very proud to learn its new notation, the vinculum (the line above the 3 which means “repeating forever”), which may feel like a first encounter with “fancier” math than “just numbers.”[3] A more in-depth understanding of infinity develops somewhere between fifth and seventh grades, but may never truly be completed (fittingly).[4]

This kind of abstract thought is exactly the kind of thing at which gifted minds excel, however, and we have discovered that it is juicy territory for much smaller learners.  After all, just because they’re doing something simple doesn’t mean it’s not profound; as science journalist Sarah Scoles describes, “… [i]nfinity can be a gateway drug to deeply personal mathematical experiences. It connects instantly to big, personal questions about life and death, power and control, the beginning of time and the end of the Universe.”[5]

Infinity is indeed a generous topic, and in the hands of the right teachers, can be leveraged to widen a crevice into higher mathematics as widely as the students will allow them to go. The benefits of this exploration are not only relevant to math, though; the complexity of the concept allows a child earnestly wrestling with it to actually improve their ability to think about complex, thorny topics in the future, whether mathematical or not.

Asking students to imagine and experience the infinite gives them better numerical intuition. It promotes active learning and metacognition — which usually take the form of inquiry — or problem-based curricula in progressive schools.  Students need to experience math – not just hear about it, as typically happens in the classroom – to understand it.[6]

So these unassuming snowflakes actually provide experiential learning in higher math, which is difficult to come by, and certainly not generally in elementary school textbooks. In fact, not only do the snowflakes allow our gifted students to dive happily into the concept of infinity, but they also offer a peek into fractals, self-similar figures that repeat infinitely regardless of scale. And, interestingly, students also get a taste of how discussions of higher mathematics tend to blur into philosophy.

A gifted mind is a hungry mind, and will feed on whatever you put in front of it.  If what you offer is meaty enough, there’s no telling where they will go with it.

[3] Despite being quite a word collector, myself, I was distressed to realize that I was never taught the name of this magical bar which was generally just called “repeating,” as in “point three, repeating.” Thankfully, I work in a place which encourages lifelong learning!

[4] Hannula 2006.  It is worth noting that this study was performed on Finnish students, who consistently outperform the US in mathematics; one wonders how different the results would be if a similar study were performed in China or Singapore, which occupy the very top spots in international test results by a wide margin.

For further fun reading on infinity, try these articles, with or without help from your gifted child:

The Life of Pi, and Other Infinities;

Teaching the Mathematics of Infinity;

Contemplating the Infinite Complexity of Snowflakes2019-12-302020-02-19https://thegraysonschool.org/wp-content/uploads/2015/08/grayson_loop.gifhttps://thegraysonschool.org/wp-content/uploads/snowflake-blog2.jpg200px200px
Recent Posts
Follow
The Grayson School does not discriminate on the basis of race, color, national origin, ancestry, religion, sex, sexual orientation, gender identity, gender expression, disability, age, or other non-merit factor to all the rights, privileges, programs, and activities generally accorded or made available to students at the school, nor in administration of its educational policies, admissions policies, financial aid policies, athletic and other school-administered programs, or employment practices. The Grayson School is proud to be an Equal Opportunity Employer. We celebrate diversity and are fully committed to creating an inclusive community at our school.