Humans cannot help but wonder about things; we instinctively seek the “why” driving the “what” of our lives. However, brilliant people — even eminent, trailblazing thinkers — also periodically declare discovery to be just… done. Complete. Over.

Albert Michelson was an accomplished physicist who founded the physics department at the University of Chicago and was the first American to win a Nobel Prize in science in 1907. His work on measuring the speed of light and his famous experimental failure with Edward Morley are direct progenitors of Einstein’s special theory of relativity — in the world of physics, there are few loftier pedigrees. There is even a crater on the Moon named after him.

Despite this truly pioneering work, Michelson may, unfortunately, be more widely famous for something else entirely: a terrible, terrible prediction he made in the Register of the University of Chicago in 1895.

While it is never safe to affirm that the future of Physical Science has no marvels in store even more astonishing than those of the past, it seems probable that the more important fundamental laws and facts of physical science have all been discovered, and these are so firmly established that the possibility of their ever being supplanted in consequence of new discoveries is exceedingly remote. (p. 159, emphasis mine)

NB How important is Michelson as a physicist?  Important enough that this quote is often misattributed to Lord Kelvin — he of absolute zero temperatures fame — who is of course even more famous and groundbreaking than Michelson, himself. That is rarified air, indeed.

This perspective is, of course, poppycock. But it is a dangerously infective and dispiriting idea for anyone for whom excitement about learning and discovery is foundational to their very being.

So, then, how do we counter that notion? By switching the lens through which our students see the world and either excavating or installing a filter of wonder.

Outside the community of those fluent in theoretical physics, that is Michelson’s most memorable remark: “We’re all done here, folks — we’ve discovered everything. Turn in your capacity for awe as you leave the auditorium, thanks for coming, tip your waitress.”

In fact, almost every gifted child (and former child) I know can recall a moment of childhood panic during which they “realize” that everything has already been discovered and there’s nothing left to do: we humans have found everything, measured everything, and understand everything. It’s all been figured out already and there’s nothing original we can add. It’s anxiety of influence, turned up to eleven. (See also: existential angst.)

Wonder Is Original Factory Equipment in the Gifted Mind

This endeavor is, of course, much, much harder than it sounds. The world we live in, soaked in technology, is quite accomplished at blaring out the idea that no matter what your idea, thought, or realization, you can Google it and get hundreds of thousands of results that immediately communicate that indeed, things are exactly as you feared — lots of other people (and now you even know how many!) have had this same thought.  *YAWN*

A teacher of gifted children must not only deliver highly challenging and differentiated instruction, but more than anything else, must preserve and nurture a sense of wonder. When working with children who are voracious learners and consumers of information, this is both mission-critical and akin to walking a tightrope while juggling a couple of bowls of goldfish and trying not to spill any water.

Happily, educational research and experience have identified a best practice that does exactly that: project-based learning. While many tout this pedagogical approach’s “hands-on” approach to learning, it offers a far wider scope and more depth than those simple terms imply. In addition to its inherent requirement for active engagement, project-based learning offers students an opportunity to feel authentic discovery for themselves, in their classrooms, and in so doing, it slowly but surely chips away at the distress caused by this “nothing new under the sun” perspective.

Unfortunately, project-based learning is often reduced to a dim shadow of its true self, and becomes instead the stuff of prepackaged experiments — it’s shop class in fancy dress. Authentic, fierce engagement in Projects classes, however, is a series of adventures in uncertainty that we build into our curriculum.

The Less You Know, the More You Can Learn

Ironically, the more seemingly familiar a place is, the better it is to demonstrate the ubiquity of wonder. The best antidote to dismissive cynicism about the seemingly familiar is a deep dive into exploration, itself. (Forgive me; a blog about gifted children can hardly be expected to ignore such an obvious opportunity for a terrible pun.)

By its very nature, it is a space of not knowing, which can be an uncomfortable place for a gifted mind to spend time; gifted children often live in a universe in which knowing things is a goal, a cause for praise from impressed adults, and rewarding in and of itself, after all.

In fact, for gifted children, it is often the inherent thrill of knowing things which leads them to embrace especially unusual — if not eccentric or outright odd — topics: if a relatively small number of people know something, it is all the more enticing, one example of which is the way advanced vocabulary can be wielded as irresistible “bait” by experienced teachers.

It is this same perspective that makes replicability, despite its crucial role in scientific progress, ultimately unappealing: familiar stomping grounds may be safe, but they’re boring.

Projects teacher Ashley Freeborn describes her 2-3 students’ work on oceanography in deceptively simple terms: the essence of the unit is not about marine biology, or shipbuilding, or even environmental concerns — what they learn instead is “how we can go about discovering the undiscoverable.”

Students do learn about the layers of the ocean (did you know that “twilight zone” and “abyss” are scientific terms, not just evocative figurative language?), but they also learn something more important: there is still a lot we don’t know about mostly everything, despite Michelson’s proclamations to the contrary. While there may be a great deal of scientific activity in a particular domain, that does not mean there remains little room for discovery.

When Ms. Freeborn tells her students that we know more about the surface of Mars than we do about the ocean floor, they are gobsmacked. Even students who feel somewhat familiar with facts about the ocean — how much of Earth’s surface it covers, for example — are astonished by “the sheer amount of ocean there is,” she says, as well as how much ocean life remains to be discovered.  They might know about sharks and dolphins and octopuses, but juicy language like “bioluminescence” and “bathypelagic” are novel (and irresistible!) morsels they devour in lessons she calls “The Deeper, the Creepier.” 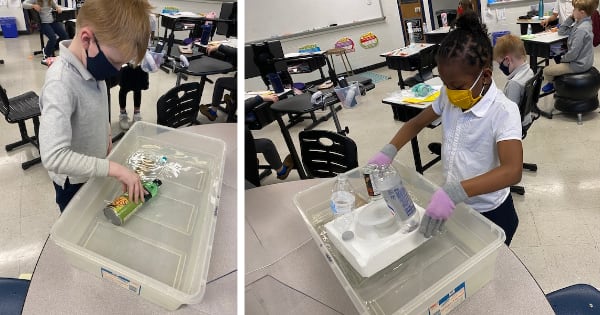 Students realize that the history of ocean exploration is connected to the history of space exploration, albeit with slightly less advanced technology. Ms. Freeborn also offers them a connection to an area they do think of as synonymous with exploration: space.  In fact, Grayson’s favorite astronaut and mentor to our students, Dr. Serena Aúnón-Chancellor, trained in NASA’s Extreme Environment Mission Operations (NEEMO — yes, really) and was an Aquanaut who lived in the world’s only underwater laboratory prior to her mission aboard the International Space Station. NASA’s biography of Serena includes this additional nugget, lest we be insufficiently impressed with her experience in inhospitable environments: “She spent 2 months in Antarctica from 2010 to 2011 searching for meteorites, [most of which] was spent living on the ice 200 nautical miles from the South Pole”!!

In fact, in a delicious bit of scientific synchronicity, Dr. Aúnón-Chancellor started out on the ocean floor to be equipped to go into space, where she did experimental research to further our understanding of Parkinson’s disease back on Earth.

“We learn how humans explore things here first, and that then we are equipped to explore more complex things,” she explains.  “It’s amazing to what lengths people will go to explore things that are so far removed from our own world… but which are not impossible.” When the 2-3 cohort embarks on its Mission to Mars unit after exploring the ocean, Ms. Freeborn’s students will take with them a new sense of possibility and a newly expanded understanding of just how much exploration is still left in the world around them, often much closer to home than they previously thought.

While astronauts are perhaps the most glamorous and visible explorers of our time, her students come to understand that they must let go of what they think they know and embrace that there is much they do not know and plenty of new territory to probe. Her students are fully engaged, so much so that she often says, “We’re ocean people now.”

Projects Class Means Problems, Yes — But Power and Possibility, Too

Of course, Ms. Freeborn includes plenty of opportunities for students to bring their considerable wonder, creativity and ingenuity to the table — they conceptualize and prototype methods for cleaning the ocean of its trash, as well as creating art with that same detritus, for example. While simply telling students about the Great Pacific Garbage Patch would generate genuine distress (appropriately so), students instead focus their energies on proactive measures such as mitigating the problem with invention and design.

They need a sense of more immediate agency in the present moment, too, which they develop by researching and writing letters to corporations with the largest contributions to plastic pollution in the ocean. In this way, engineers and wordsmiths alike realize that their contributions are valuable and problems that may initially seem insurmountably large can be approached simultaneously from multiple angles.

Teachers of gifted children can relay plenty of stories in which their students make unexpected connections or have moments of surprising insight; these flashy moments are exciting and rewarding, to be sure. There are more important moments in teaching these remarkable children, however, though they are often less visible.

The real moments of transformation in the classroom don’t always have to do with acquiring knowledge, but instead feed students’ curiosity and reward willingness to take risks and to embrace the ambiguous, the uncertain, or the unfamiliar.  Students arguably learn the most when they venture forth into places where wonder and existential dread rub shoulders, like the abyssally dark and alien depths of our oceans.

A skilled teacher of gifted children can carefully lead students into open, uncharted waters — or better yet, teach them to purposely wander (wonder) out there on their own to see what they can see.