They may find it difficult to find friends in a typical school environment or extracurricular activity. The more gifted they are, the more difficult it may be for them to find social connection with other children their age, and understandably so. It is common interests and perspectives that bring people together, of course, or perhaps a common world-view and goals.

Another reason that friendships may be frustratingly difficult to form, however, is an amorphous but often pervasive characteristic of the gifted: intensity. As we know, gifted children often pursue intellectual interests with zeal, devouring information about even very obscure topics. Of course, the more they know about a topic, the more specialized their knowledge becomes — and the more specialized the topic, the less likely their age-peers are to have encountered it.

You can see how this catch-22 means that gifted children often encounter the dilemma of not knowing anyone else who is interested in the Korean War, for example, or who follows the New York Stock Exchange, or who has read everything Tui T. Sutherland has ever written (including the books she wrote under a pseudonym, duh).

Intensity of interests is one reasonably common trait of giftedness, perhaps, but intensity in friendship, itself, is something that may surprise many adults. A gifted child often seeks not a buddy, but a soulmate — and nothing short of that will do.

To them, this is a 100-percent-or-zero-percent problem (along the lines of the search for the perfect Penguin) that may seem self-evidently self-defeating from the outside: after all, if you need a friend and don’t have one, perhaps you should be less picky, no?

(Such an adult-flavored answer, harrumphs the gifted child, as if making a friend were like going to a farmer’s market and choosing an imperfect apple rather than no apple at all.)

The same gifted brain that wants to know all the things there are to know about something is the one in charge of making friendship happen: half-measures just aren’t worth the effort. And you may have to add in in the possibility of one or more overexcitabilities making an appearance in the driver’s seat (why, hello, imaginational overexcitability, able to conceive of what it would feel like to have someone who loves all the things you do just as much as you do; and I’m lookin’ at you, too, emotional overexcitability, with your heightened sensitivity and deep emotional responses to the world).

It can make for a heady — and exhausting — mix.

“Marilla,” she demanded presently, “do you think that I shall ever have a bosom friend in Avonlea?”

“A bosom friend—an intimate friend, you know—a really kindred spirit to whom I can confide my inmost soul. I’ve dreamed of meeting her all my life. I never really supposed I would, but so many of my loveliest dreams have come true all at once that perhaps this one will, too. Do you think it’s possible?”

While the language we use to describe friendships has changed since Anne of Green Gables, she is seeking exactly what so many gifted children are looking for.

One of our teachers characterizes this sort of behavior as being “thirsty” for friends. In a terrible irony, this very thirst can be off-putting to others who don’t live emotional lives that are quite so intense. Gifted children, who may have little to no experience with having friends their own age, may be so thrilled at the very idea of making a friend at all that they throw themselves into the relationship wholeheartedly, which might be understandably overwhelming to another child.

It is perhaps for this reason that those who attend residential summer programs for the gifted often make fast friends very quickly: they are surrounded, twenty-four hours a day, by other students like themselves, who share a passion for intellectual pursuits. And as we know, the more gifted they are, the more experience they have with feeling — with being — different from their peers. Speeding from the desert to the deep end of the pool is hardly a surprise, given these circumstances. 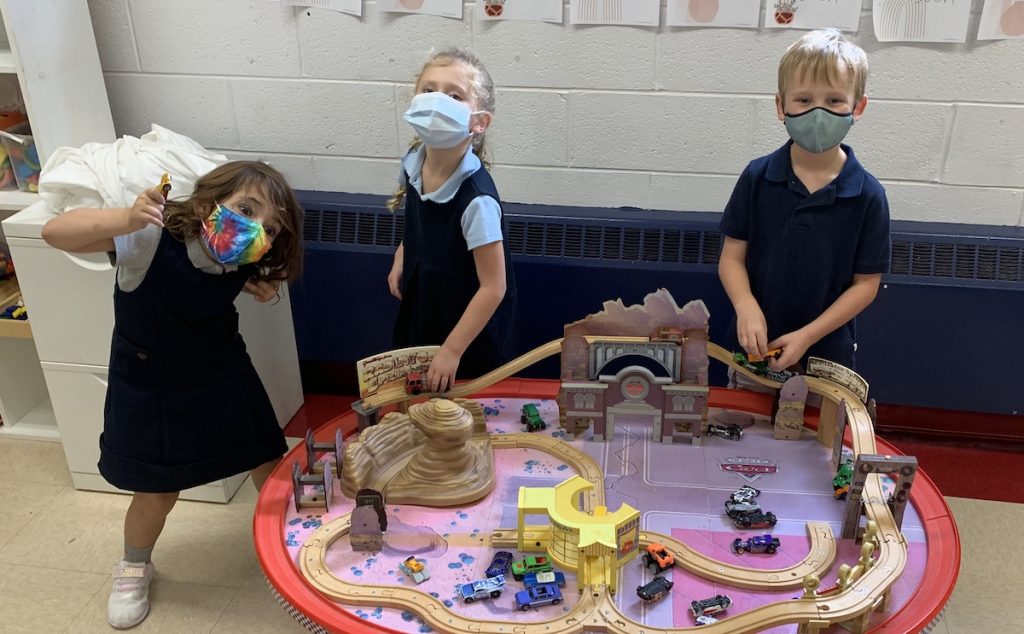 In an all-gifted environment, it can initially be a challenge for these children to gradually relax that impulse to seize upon friendship and grasp tightly with both hands. In the company of intellectual peers, they can begin to relax and be more comfortable in who they are. This is one of the greatest benefits to an all-gifted school: it is when they are truly able to feel like they can be themselves that genuine friendships can form with others.

Arguably, gifted children who have had difficulty connecting with other children are not only unpracticed at making friends, but also at the ebb-and-flow of friendships. We adults understand that friends come and go in our lives, depending on the “age and stage” in which we find ourselves. That doesn’t mean we are not still friends with people we knew decades ago; it just means that we are perhaps less close with them than we used to be, and instead have other people in our lives who now fulfill that role. This dynamic social connection is not something we grieve or fear, but accept as part of the normal rhythms of adult life.

To gifted children, however — especially those who are profoundly gifted — this sort of natural waxing and waning may seem appalling. In fact, given their often supersensitive emotions, it might seem world-ending. Part of this is understandable in that they may have waited a long time to have a real friendship, given their relative rarity: once they have indeed made a friendship, they can be especially loath to allow it to lessen in intensity, afraid that they might not ever find a friend again.

Back in Green Gables, this might be the kind of fear that drove Anne, upon meeting a girl her age, to immediately pledge eternal fealty with this extemporaneous oath: “I solemnly swear to be faithful to my boson friend…as long as the sun and moon shall endure.” I don’t know for sure if Anne was a gifted child, but that moment certainly makes her sound like one. (In case you’re wondering, the friend’s response is to indeed swear eternal friendship, but she also replies with, “You’re a queer girl, Anne…. But I believe I’m going to like you real well.”)

Gifted children often recognize and appreciate the outlier-ness of each other — the intensity with which they live in the world — more than specific topics or expertise or interests. Yes, it is always more likely that those who share an interest or two will become friends, but the very existence in the world of other people somewhat like themselves (for whom regular light is made of more colors) is an astonishing and exhilarating discovery that they often do not experience but desperately want. It is no wonder that they want to embrace it with their whole selves.

Gifted children often recognize and appreciate the outlier-ness of each other, the intensity with which they live in the world more than specific topics or expertise or interests. Yes, it is always more likely that those who share an interest or two will become friends, but the very existence in the world of other people somewhat like them (for whom even regular daylight seems to be made of more colors) is an astonishing and exhilarating discovery that they often do not experience but desperately want.

Who among us would not appreciate someone who values our friendship that much? As Eleanor Roosevelt famously said, “Many people will walk in and out of your life, but only true friends will leave footprints in your heart.” Gifted children might be worried about the first half of her characterization, but would surely agree with the latter: the emotional impact of their friendships — whether sworn over running water with clasped hands like Anne or not — can often be an enduring and deeply important part of their development into who they’re meant to be.