Ms. Brown is honored to be a part of the Grayson team working in Film Studies and as a Teacher on Assignment. She brings a wealth of experience in various backgrounds including film production, social work, and teaching. She earned her B.A. in Film & Theatre from the University of New Orleans and went on to work various crew roles on productions such as NCIS: New Orleans, Creed, Deepwater Horizon, and The Magnificent Seven. After stepping away from the Hollywood film industry, she pursued her Masters of Science in Social Work from the University of Tennessee. She has worked with vulnerable populations such as families experiencing homelessness, adult and minor survivors of human trafficking, and individuals struggling with substance abuse.

Ms. Brown finds that her love for creative storytelling and social justice coalesce beautifully in her passion for teaching. Whether she’s subbing in PreK, creating a short film with middle schoolers, or analyzing the technical choices of a director in Film Analysis with upper schoolers, she strives to bring her most authentic self to every role and encourages her students to do the same.

When she’s not geeking out over film, some of her other loves include knitting, cooking, hiking, and dancing (beginner level!) A Southern girl at heart, Ms. Brown is originally from Nashville, TN, but she now calls Philadelphia her home. 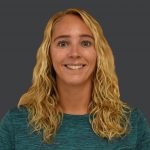