Gifted children are known for being sensitive — to new ideas, to scratchy labels in their clothes, to artificial colors, to flickering fluorescent lights — so it should not surprise us that they are often highly emotionally sensitive, as well. Their parents may think of this as “oversensitive” or “intense,” and could have a difficult time helping them navigate the world as a result. For instance, it’s difficult to have such a child if you live in a major city and your child becomes extremely saddened when passing a homeless person asleep on a street corner. And watching television can be fraught because of tear-jerking commercials that can make an emotionally sensitive child melt: if you’re an adult, you probably have vivid memories of Sally Struthers’s ads for the Christian Children’s Fund in the early 1990s urging viewers to support “starving children” in “third-world countries,” while a more recent example might be Sarah McLachlan’s ads against animal cruelty.

In these cases, it is the viewer’s emotional intelligence, or “EQ” that makes commercials effective; the advertiser is counting on your being able to pick up on the emotional “temperature” of the commercials — and also that you won’t be able to resist the tug from your sense of compassion to help. EQ is the capacity to understand the social dynamics around you — a deeper understanding of your own emotional responses to things as well as more sensitivity to the feelings of others. EQ can also include the ability to manage emotions (your own or others’) and adapt them to different environments in order to meet one’s goals. While that last part may sound suspiciously like manipulation, it is, in fact, a highly adaptive trait that allows us to live harmoniously together. For example, successful stand-up comedians and other public speakers must have high EQ because they have to be aware of how their audience is responding to them and change their routines accordingly if they sense that a particular line of jokes or set of comments is falling flat; similarly, an executive who can tell that their team is feeling frustrated and anxious about a project can address those feelings rather than letting them fester.

Of course, compassion is a desirable trait, and that particular brand of emotional sensitivity is a common characteristic of the highly creative. But in a gifted child, a powerful intellect may be combined with emotional maturity, and may manifest as empathetic awareness that can interfere with reason. This phenomenon, called asynchronous development, is typical of gifted children (and, in fact, one of the ways that many suggest they be identified). Asynchrony that involves emotional responses may show up as a bright ten-year-old who reacts like a typical five-year-old in the face of adversity, for example, or a teen who ignores logic and bursts into tears after a parent explains why a stray dog can’t be brought home.

Higher emotional awareness and responsiveness, like many traits, can be either problematic or a strength, depending on how it is expressed. If a child is emotionally “porous” in this way, then exposure to information that is distressing — such as the news (especially this election season!), emotion-driven television ads, or even learning about particularly grim episodes in history — can be upsetting, and the child may not have the resources to pull him- or herself out of whatever feeling they find themselves in. In this case, adults need to provide support, which they can do by putting the information into context. That can mean reminding them that the political comment that upset them is not necessarily everyone’s understanding of the truth, or that historical event is over and not continuing today, or that the plight of the animals in the commercial is not the plight of animals everywhere. 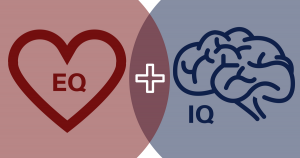 EQ and your Gifted Child

By contrast, EQ can also be a great strength gifted children can use to be more successful. If their highly-tuned “antennae” for emotional climate are able to pick up subtle differences in the way people respond to them, then they may be better able to modulate their behavior in social situations. Gifted students who take on the role of “class comedian” need to be able to discern when offering a joke will come across as disruptive and disrespectful or whether or not it might be a good way to lighten up the mood in the room during a tense discussion. It’s easy to picture this going badly — the student who keeps returning to the same “punchline” again and again in hopes of getting the same positive response as the first time, for example, may have an EQ that is not suited to picking up the “enough already!” social signals classmates are giving off. By contrast, a student with higher EQ might sense the right time to share a clever pun during a discussion, coming across as charming instead of deaf to the social signals coming from others.

Ideally, a gifted child could use his or her heightened EQ to realize when someone (a teacher or adult) is getting frustrated with them long before any real negative response is manifested; they could then use that same awareness to change the dynamic of the situation either by changing their behavior or adapting. They can be wield their characteristically advanced vocabulary as an effective tool to help them accomplish either of these goals. In the “worst-case scenario,” however, a gifted child can pick up on emotional signals from others but not be able to change his or her behavior to respond in a positive way; this is the child who can tell that other children are not happy to have them as a partner on a group project but are not sure what to change to make things work smoothly. (In this case, the student would almost be better off not noticing the classmates’ feelings!) If a high EQ coexists with well-developed self-regulation skills that allow social responses to be tweaked “on the fly,” it can be a genuine strength that helps students find social acceptance and more smoothly navigate through life.

Relationships and patience are put to the test, though, if the highly empathetic child exhibits little self-sympathy, which is often the case. These children, with their intense awareness, can be self-critical and take blame for problems or causes in which they have zero connection — like a school shooting, the onslaught of a virus in a country far away, or any catastrophe, really. Again, reason might not comfort the inconsolable, but parents can begin by sharpening the child’s anxiety or fear-management skills early on.

How can parents help?

Writer and gifted children expert Carol Bainbridge advocates creating an emotional response scale when a negative emotional experience swamps a gifted child. Essentially, the practice involves using a calm, non-crisis moment to create a list of scary or sad events that he or she rates from 1 to 10. Then, when the child experiences something and begins to catastrophize those feelings, you can pull out these “feelings scales” together and compare the current situation to those “worst-case scenarios.” Is the feeling truly a 10 in magnitude? Or now that they can see another example of a 10 (importantly, it’s one that they chose), do they realize that this is, in fact, more of a 6… or a 4?

The central piece of advice that all experts agree on is not to dismiss a child’s apprehension. Parents and educators should acknowledge and accept the feelings, discuss with the child how they came about, and practice coping strategies that will empower them as adults.

Far more important than any techniques for handling an emotional crisis, however, is this: you can best ease your child’s emotional ups and downs with compassionate acceptance. “Empathic children need to be taught to build an invisible force field to protect their vulnerable hearts,” writes Linda Silverman, founder and director of the Institute for the Study of Advanced Development. Similarly, keeping yourself on an even keel makes an important difference in the emotional “climate” of your home and your relationship, and can give your child the sense of calm and steadiness they need to make their way in our often-chaotic world.

The Social and Emotional Characteristics and Traits of Talented Students

If you live in the greater Philadelphia area, we would love to meet you and your child at an upcoming workshop or open house.  Visit our calendar for upcoming events!

This post is included in Hoagies’ Gifted Blog Hop on Emotional Intelligence.  Please visit the Blog Hop to read more posts on this topic!